skip to main | skip to sidebar

Worldnames is academic project developed in England and concerned to the migration flows.

From the analysis of large databases of name records across the world in this site
http://www.publicprofiler.org/worldnames/Main.aspx
you can examine where in the world people with your surname are found and how is popular your surname in a specific area.
In this picture I tryed how it works. 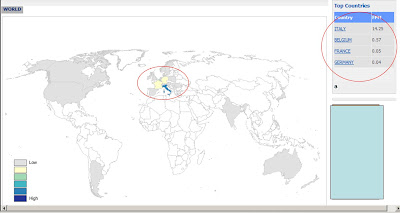 "Home" is the movie i saw yesterday, outside the panoramica 2008.
I considered as the best in the entire week.
It is the funny story of a family living happily in an isolated house at the edge of an unused motorway. The highway will reveal strong intimate ties between the characters and it becomes the place where each one of the characters projects their own neurosis. The parents try to protect their family from the infernal noise and dangers that are presented when the road is opened to traffic. Their grumpy daughter continues to don her bikini and languish in a deckchair despite the cars whizzing close by; the middle daughter frets about the effect of the noxious fumes; and the youngest child sees it all initially as an adventure. Isolation turn into madness. As time goes by, the tone of the film shifts, becoming less comic as the director introduces elements of melodrama and horror. All the movie jump from a dramatic scene to another one that’s a bit more burlesque. Caldamente Consigliato!!!
Posted by ::ChandrinkaEgo:: at 3:01 PM No comments:

::ChandrinkaEgo::
This blog is just to organize
my own thoughts and things
I like.
p.s. if you are not interested it, just ignore it
::CHANDRINKAEGO:: won't bug you again